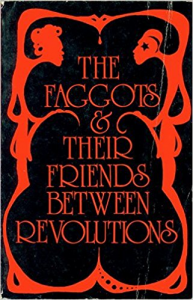 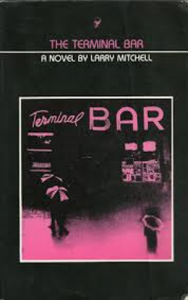 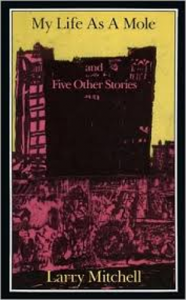 Larry Mitchell helped clear the way for many of us, even if we didn’t know it. When I met Larry in 2008 to interview him for the Gay and Lesbian Review, we discovered that we had grown up thirty miles apart in Indiana (“It was a nightmare!” he exclaimed and I agreed.) Only after I made my way to graduate school, to New York, and then onto the faculty of the College of Staten Island, CUNY did I learn that I’d been following Larry around my whole life. Thirty-five years apart we had lived within a few blocks of each other in the St. George neighborhood of the forgotten borough. By the time I arrived Larry had long since moved to the Lower East Side and retired from the College (which was also home to his fellow queer luminaries Bertha Harris, Arnie Kantrowitz, and Sarah Schulman). Then Sarah introduced us, and I suddenly found myself sitting in Larry’s living room, having finally caught up to him, and we become friends. From time to time after that young queers would contact me about the GLR interview. These occasions gave me the chance to call Larry up and put new readers in touch. I treasure those phone calls, his resonant gay voice. Generous and pleased, he always said yes to those of us lucky enough to have followed.

Larry Mitchell, gay novelist and publisher, died of pancreatic cancer on December 26, 2012 in Ithaca, NY.  With his lover Rick Morrison, Mitchell lived in New York City and Ithaca.  He was 74.

Mitchell was best known for his unsentimental depictions of queer life in New York City’s Lower East Side and East Village in the 1980s and ‘90s. His novels include The Terminal Bar (1982), In Heat (1986), My Life as a Mole and Other Stories (1988) for which he won a Lambda Literary Award, and Acid Snow (1993). His early The Faggots and Their Friends between Revolutions (1977), originally conceived as a children’s book and illustrated by Ned Asta, secured Mitchell’s reputation as a champion of radical queer life and politics. When neither straight nor gay presses would publish The Faggots and Their Friends, Mitchell established his own press, Calamus Books, which specialized in gay male literature. It would be his most successful book, with three printings and 10,000 copies sold. He would go on to cofound the Gay Presses of New York. Mitchell’s other notable publications include Great Gay in the Morning: One Group’s Approach to Communal Living and Sexual Politics (1972) and the coedited volume Willard W. Waller on the Family, Education, and War (1970).

Larry Mitchell was born in Muncie, Indiana on July 12, 1938. He matriculated at Colby College in Waterville, Maine in 1956 and moved to New York City in 1960 to attend graduate school at Columbia University, where he earned a Ph.D. in sociology. In 1969 Mitchell joined the faculty at Richmond College and then the College of Staten Island, CUNY where he taught sociology, sexual liberation, and feminism for the next 25 years. As part of the “25 to 6 Baking and Trucking Society,” a communal living and writing group in the St. George neighborhood of Staten Island, Mitchell found himself the subject of FBI surveillance: “For a year and a half they would steal our garbage. We had a lot of fun with them, because we weren’t doing anything. It was wild.” At Columbia he had been a student of the ways power is exercised within culture, and this training would inform not only his thinking about gay liberation activism—he attended meetings of the Gay Liberation Front in the fall of 1969—but also his sociological approach to fiction. “I’m not a psychological writer,” Mitchell claimed. “I don’t really get into my characters’ psychology. I’m interested in their behavior, in what they say, in what they do. And New York gay culture was very much like that: here we are, let’s do it, what are we going to do?”

Ensconced on Second Avenue between Seventh and Eighth Street for much of the 1980s, Mitchell chronicled the behavior of the fellow gay revolutionaries, street kids, hourly laborers, addicts, and artists who made up his ever-shifting, ever-threatened community. His fiction defended against the dual threats of capitalism and assimilation, not only thematically but stylistically. Of In Heat, Boyd McDonald wrote, “it is a novel of rare purity, without a single fashionable line.” As AIDS decimated both his neighborhood and his readership, and due to his increasing blindness, Mitchell stopped writing in 1993. A distinctive literary voice, Mitchell remains a treasured historian of marginalized gay cultures.

(originally published by Matt Brim in The Gay and Lesbian Review Worldwide, May-June 2013)

If you want to add yourself to this blog, please log in.

Need help with the Commons? Visit our
help page Send us a message

Built with WordPress Protected by Akismet Powered by CUNY